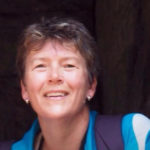 brownie249
A fabulous start with everyone at school on time. Our little bus journey was quite uneventful, taking in the opportunity to go down the bus lane. We arrived at the airport around 7:40 in pouring rain, but luckily had an undercover drop off. Mr Small set a cracking pace and we arrived at counter K ready for check in. Despite asking for a group check in and having an email in hand to say we did, they indicated that there wasn’t one booked so passports were handed back and we had to check in individually. 🤪🤪
Through customs and yes one of the students put their passport in the machine and forgot it -I’m sure we discussed this at our weekly meeting 🙄 Through to screening, generally all went well, and yes someone forgot to collect their bag 🙄 luckily they remembered early enough not to cause an airport shut down 😮
Mr Small had the girls walking at such a pace that some of them had to run to keep up with the group-onto to gate 61 and straight onto the plane. The flight has generally been quite good, roomyish seats and movies to keep the girls entertained. Meals have been edible, not an awesome variety but we are not starving. I have had my first little nana nap 😴 of the tour and feeling quite refreshed.
The tour bus we have is like a limousine sooooo comfy, the hotel is clean and relatively comfortable. All the girls now in their rooms and settling in.
Good first day
Beginning of the journey 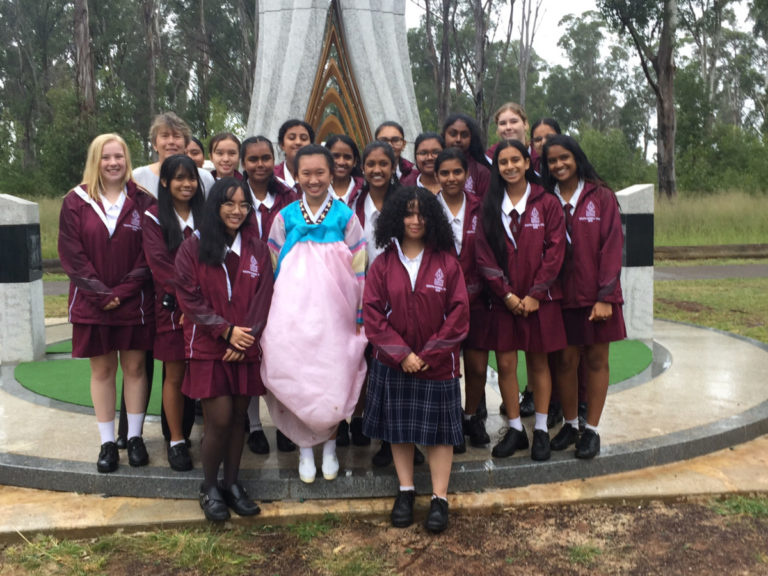 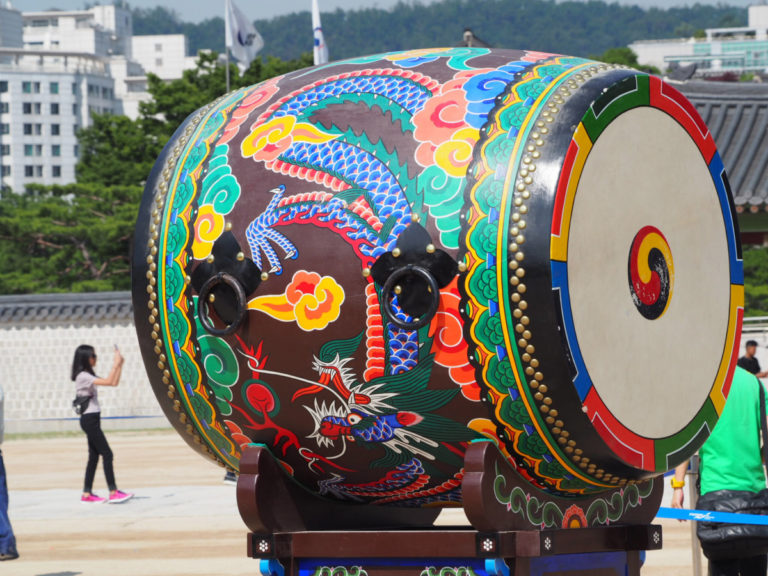 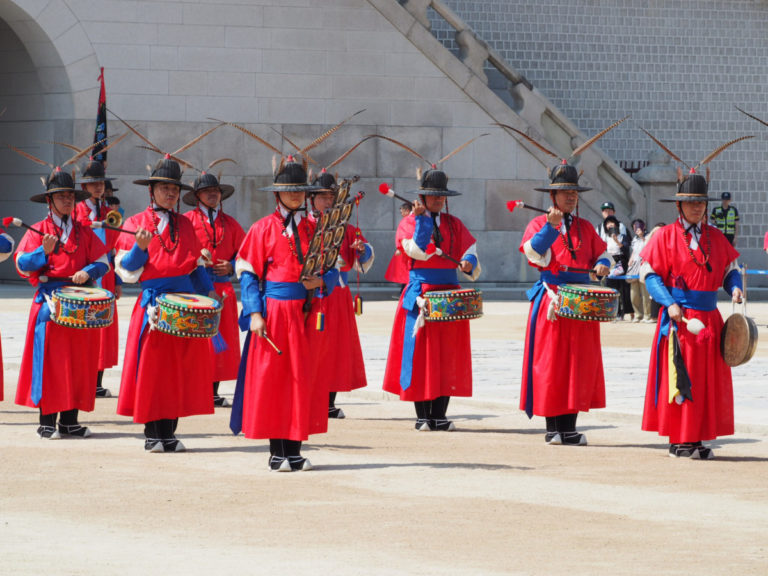 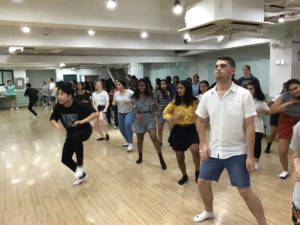 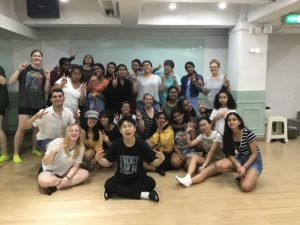 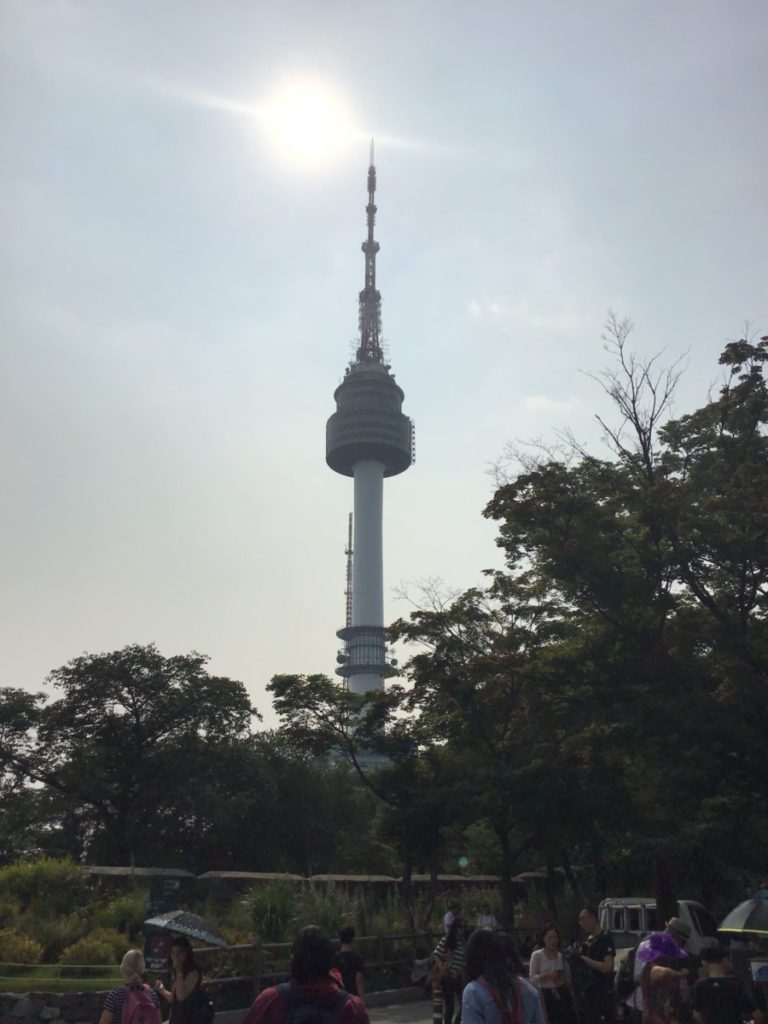 Today was a huge day - leaving at 9.30 and arriving back at 8 pm. The girls have all gone to their rooms and are sorting out their stuff for another big day. Breakfast in the hotel started at 8 am and was a great spread, lunch was market food, where a lot of us had mung bean pancakes. Dinner was a great buffet with the piece deresistance the waffle machine that many of us used. At lunch I looked at the next table and there were these wriggling things on the plate, apparently they were baby octopus legs, they invited me to eat one of the little wrigglers - it was sort of like chewy calamari with a garlic sauce. Our first stop today was the Gyeongbokgung Palace, we saw the changing of the guards. I have been in China and I can honestly say that the buildings are very similar, the colours are striking and the roof line and structures including gargoyles are almost identical. Our next visit was at the children’s museum where we learnt all sorts of interesting facts about the children’s cultures in South Korea. Well I can honestly say I do not and will not have a career in K Pop dancing ( and neither do my fellow teachers) some of the kids were great and really picked it up well. Our next stop was at the North Seoul tower. The lift took us up 333m up the tower and we saw the expanse of the city. The girls were very taken by the lock wall, with many couples pledging their love with a lock. Home for a quick market shop before an amazing buffet dinner. A great day in Sth Korea. 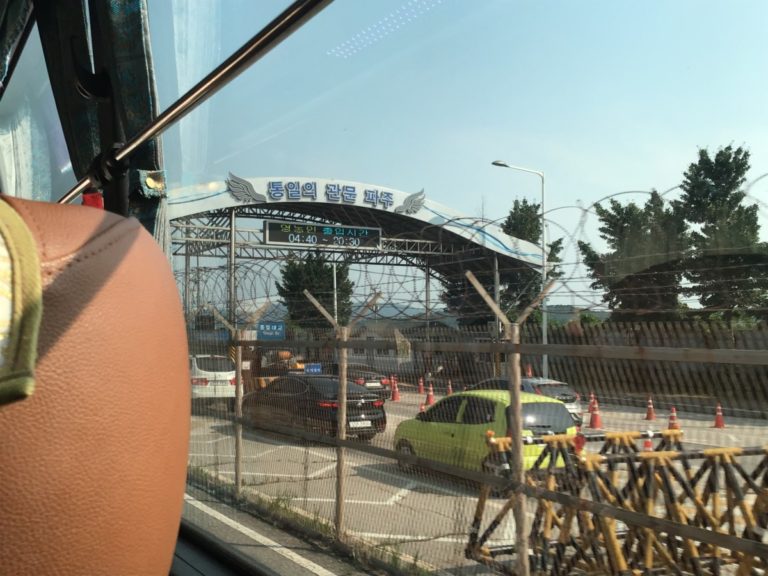 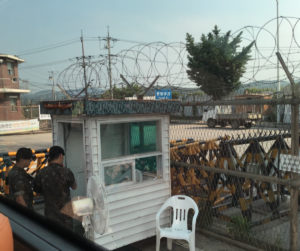 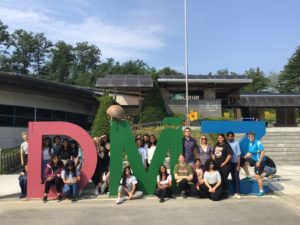 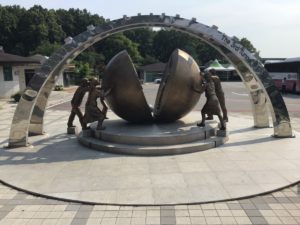 Today was a super busy day with an early start. we had passports in hand and made our way to the DMZ. Along the river that we ran parallel to, there was barbed wire, one of the defences of South Korea. we were met by a pair of military officials who boarded the bus and checked our passports which were held against our faces, we must have looked ok as we all passed and we waved through. The zone is about 2 km across each side of the demarcation line. There was some earlier agreement to allow the 2 countries to meet and reunite but due to the discovery of the undersground invasion tunnels and other suspicious activity the lines were closed. we went down tunnel no.3, it was 73M down with tall people having to bend down to walk through, each person was luckily wearing a hard hat. The walk back up was certainly arduous and very taxing on the CV system. Mr Smal and I went down to the platform to see the now defunct railway station. Back to the hotel and a great hour was spent at the Running Man obstacle course, Mr Small was the teachers champion and  Simar was the students champion. A quick trip home and back out to watch the NANTA performance, where the musical instruments were all kitchen urensils. It was a great show and had the girls engaged. Dinner was a traditional Korean BBQ -they were fabulous in providing a wide variety of meals for the girls, the majority had a pork BBQ with traditional vegetable, some had beef and some had vegetarian. Overall a varied day, with political, historial, physical, musical and drama elements. The girls are taking full advantage of the washing machines and getting a bit of washing done before we move out in the morning.